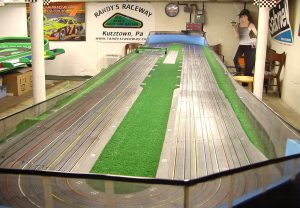 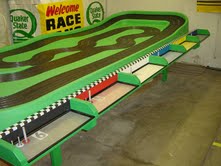 It was again time for the St. Patty’s Day race weekend to get under way this year. It was the 8th annual race and with great weather for all there were 28 racers making the trip to Randy’s Raceway in Kutztown, PA. Racers came from four states and also from another country. The states included: Connecticut, New Jersey, New York, Pennsylvania, and the country of Canada. It was time for Green on Green on St. Patty’s Day racing.
On Saturday the doors opened at noon and 16 racers took advantage of this pre race practice time. Sunday morning came fast as the doors opened at 8am and the racers were here waiting to get in. The pit area filled up fast with all the racers getting settled in. Coffee and donuts were here for everyone to enjoy in the morning.
The list of entries was completed, the Super Stock and Indy cars were called to pre-tech. We had the drivers meeting and the National Anthem was played on screen by Hewy Lewis and the News. The names were divided and entered into the racing computers at the tracks. One group raced Super Stocks on the Tub 3 minute round robin and the other group ran Indy Cars on the 8 – lane oval 2 minute round robin. After both groups finished racing we switched and everyone completed their races.
While the scores were combined and totaled Spud’s put out the pulled pork, perogies, loaded fries, regular fries, and lots of other snacks to enjoy including the traditional green beer on tap.
After dinner the top four finishers for each class were announced and all passed tech.
The Super Stock winner was Joel Lux ( New York ). Joel took the competition by running a total 205. He won by a 4 lap margin to take the victory. Second place went to Marc Sevier ( Canada ) and only 1 lap behind was Dave “ Flash ” Kaiser ( Connecticut ). Then 1 more lap behind for 4th was Donny Auriema ( New Jersey ).
Next up is the Indy Car finish and it appears it is going to be the Joel and Marc show. Joel won the Indy class with 221 laps. Next for 2nd was Marc 10 laps behind Joel. So you can see where this is going heading to the Nostalgia class. 3rd was Donny once again only by 1 lap and along comes Flash 1 lap behind Donny for 4th.
The 3rd racing class for the day was Nostalgia 2 minute round robin on the Tub. 27 out of the 28 racers stayed for the event. And why should this race be any different then the first two races? Joel scored the win for the Triple Crown of the St. Patty’s Day Event. There was a slight twist in this finish for second, Dave Simms came in and showed us how well he can run the skinny tires. 3rd was Flash and 4th was Donny. Dave playing the spoiler broke up the mighty 4 that dominated the day.
Spending a great weekend with friends and to have the competitive racing that we have is fantastic. There were quite a few ties and most separated by only 1 lap.
Top 10 racers in each class:
Super Stock  5th Dan Wirfel / 6th Jim LeVan / 7th Jeff Crosley / 8th Vic Quinones / 9th Sheldon Hiester / 10th John Venza
Indy Car  5th Ray Kurtz / 6th Dan Wirfel / 7th Sheldon Hiester / 8th Vic Quinones / 9th Robin Schroy / 10th Jim LeVan
Nostalgia   5th Marc Sevier / 6th Randy Haydt / 7th Robin Schroy / 8th Jim LeVan / 9th Pit Stop / 10th Shane Hiester
Honorable mention   Jim LeVan having a great day of racing. Jim was the only racer to place top ten in all 3 classes besides Joel, Marc, Flash and Donny.
To the regulars who could not make it here this year there will be next year.
Thank you to everyone who helped keep the races moving all day long.
Dates for the next St. Patty’s Race will be practice Saturday March 14 and race day Sunday March 15, 2020.
Thank you all for your support of the St. Patty’s Day Race. 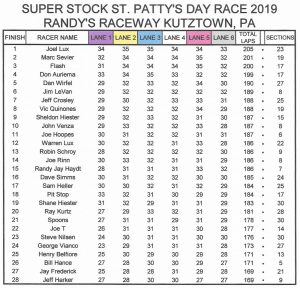 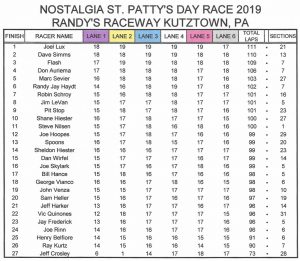 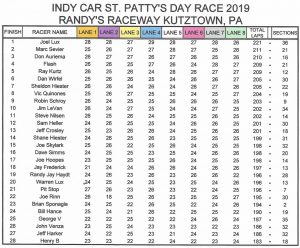