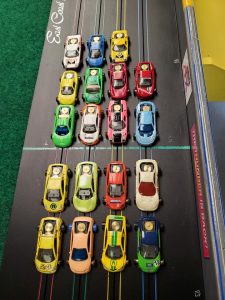 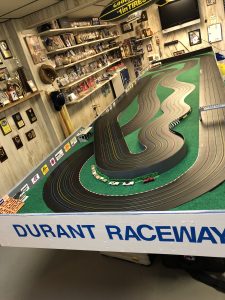 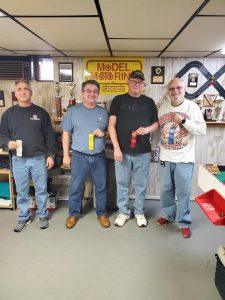 The 1st Annual ECHORR Santa’s Bag of Parts Race went off with a huge success today. 19 Racers signed in to build and compete. The race format started with Santa dropping off 19 NOS Aurora Thunderjet Hot Rod Chassis. They were completely NOS. The only change being that the rear RTHO SOS hubs were correctly installed by Hiram. The cars were distributed using a randomizer app – Each racer pushed the button and the number that came up was the car bag they were given. The racers were split into 2 groups. Pro Builders and Novice Builders. The Pro Builders led by Hiram Durant, BK, Chuck Schaefer, Derek Schaefer, Randy J, Bill Hance, Victor Q, Donnie A. had 45 minutes to assemble their cars on a running clock. All parts that came with the NOS Chassis had to be used, No new parts were allowed. After the Pro Session ended, The Novice Builders were up while the Pro Builders assisted in the build of their cars.90 minutes later – A 19 car ECHORR SOS Field was ready for warmup’s. Each racer was given 1 minute to test and tune their racer, on 1 lane only.

After the feast – It was time for racing. Each racer had a 1-minute round robin qualifying session to set the ladder field. Hiram Durant and Chuck S. led qualifying while we set the ladder field for the B, C, D,E and F qualifying races. The qualifying races were 2-minute heats on each lane, the winner moved on to the next main, while everyone else packed up for the day. Robin Shroy won the F Main, Freddy Mac won the E Main, Derek S. won the D & C main, Vic and Donnie transferred to the A scoring the top 2 spots in the B. The racing in each was extremely close and we saw tight racing all day. Kudos to the Pro Builders for sharing and teaching everyone in attendance how to truly build and race a NOS Tjet. Each Participant walked home today with a race ready SOS Tjet.

Special Thanks to Hiram Durant for hosting. Randy J. & Hiram for prepping the field. BK for providing the NOS Tjets. All 19 Racers for coming and bringing some outstanding food. This is what the hobby is about. A super day that we hope was enjoyed by all. Thank You, Tom Wenner 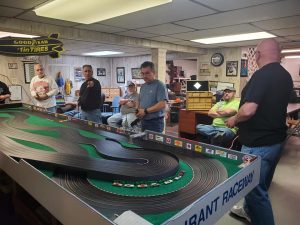 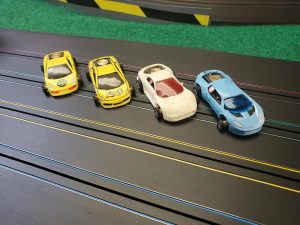 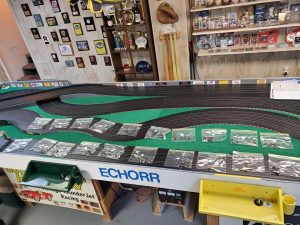